Plague is a communicable disease that affects rodents, some animals and humans. Plague in human is a serious disease with a case-fatality ratio of 30% – 60% for the bubonic type, and is always fatal for the pneumonic type when left untreated.

Plague is transmitted from an infected animal (mainly rodent) to humans through the bite of infected animal's fleas. People can also contract plague when cuts or other breaks in their skin come into contact with the body fluid or tissue of infected animals, or through inhalation of infected respiratory droplets. Bubonic plague is not usually transmitted directly from person to person unless there is contact with pus from suppurating buboes. Pneumonic plague is highly contagious. It can spread between humans by inhalation of respiratory droplets from an infected person.

Patients with bubonic plague typically experience a sudden onset of illness characterised by headache, chills, fever, malaise and painful swelling of the affected regional lymph nodes. The infection can progress to septicaemic plague when the bacteria invade the blood stream. The infection can be spread to other organs and cause serious complications. Patients with pneumonic plague typically present with chills, fever, headache, body pains, weakness and chest discomfort, cough with blood-stained sputum, difficulty in breathing and may die rapidly if not treated immediately. The patient is highly infectious in this most serious form of plague.

For details, please refer to the factsheet of plague. 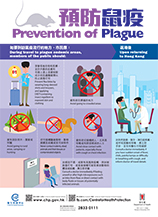