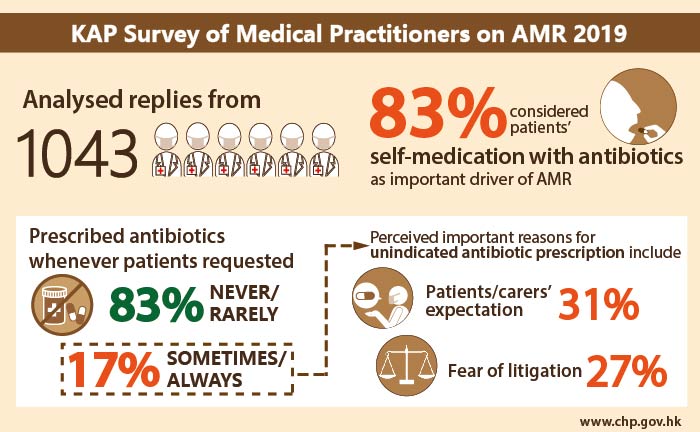 The Department of Health (DH) commissioned a research centre to conduct a knowledge, attitude and practice (KAP) survey of medical practitioners on antimicrobial resistance (AMR) (“the Survey”) in 2019.

The sampling frame of the Survey involved a random sample of medical practitioners with full registration with the Medical Council of Hong Kong under the Medical Registration Ordinance who were on the Resident List of the General Register as at 1 July 2018. The Survey was conducted by self-administrated paper-based or web-based questionnaire consisting of 24 questions in English. Paper-based questionnaires with unique QR code and password (for access to web-based questionnaire) were mailed to selected medical practitioners. The fieldwork was conducted during 11 September to 31 December 2019, achieving a sample size of 1 074 (including 364 primary care doctors) and a response rate of 12.3%.

Key findings relevant to members of the public and patients

Recommendations relevant to members of the public and patients

Since patients’ self-medication with antibiotics was considered by most respondents an important driver of AMR, members of the public should be explained more about the disastrous consequences of AMR instead of merely asking them to stop practicing self-medication.

With significantly more respondents who "always"/"often"/"sometimes" prescribed antibiotics for uncomplicated URTI upon patients’ requests considered “expectation/request of antibiotics by patients or carers” and “fear of patient’s litigation” as important reasons of unindicated antibiotic prescription, and a significant proportion of respondents were frequently requested by patients for antibiotics for cold/flu/URTI, patient education and expectation management should be enhanced in public promotional campaign.

The executive summary and the full report can be accessed here.