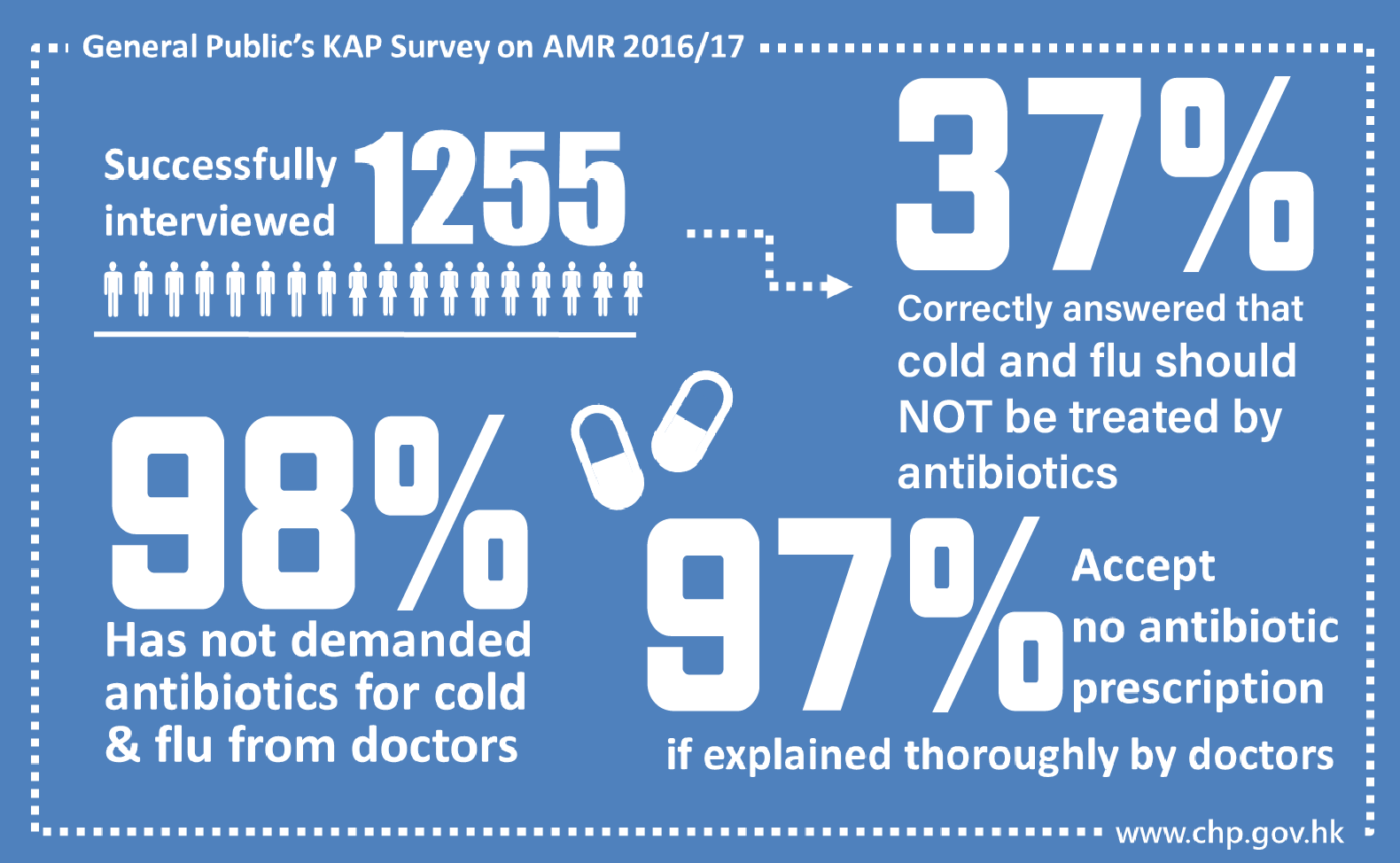 The Department of Health commissioned a research centre to conduct a territory-wide telephone survey to gauge the general public’s awareness of Antimicrobial Resistance (“AMR”) problem; knowledge, attitude and practice on antibiotic use; and their views on potential control measures and AMR-related health promotion.

The survey was an anonymous telephone survey. The target respondents were Cantonese, Putonghua or English-speaking non-institutional Hong Kong residents (excluding foreign domestic helpers) aged 15 or above. A bilingual (Chinese and English) questionnaire was used to collect data. Fieldwork took place between 23 December 2016 and 19 January 2017. In total, 1,255 eligible respondents completed the interview. The response rate was 10.8%.

This study showed that the majority of respondents were aware of antibiotic resistance and its risks. However, half of them considered themselves incapable of stopping the AMR problem. This study also identified that misunderstanding on indications of antibiotics remains prevalent with over half of the respondents mistaking cold and flu as conditions treatable with antibiotics. Awareness-raising activities of the general public should be strengthened to fill this knowledge gap in future health promotion programmes. It is noteworthy that most respondents would comply with doctor’s advice on the need of antibiotics for cold and flu or viral infections. Therefore, health advice and education provided during medical consultations can also serve as a powerful intervention in reducing inappropriate antibiotic use.

The government launched the Antibiotic Stewardship Programme (ASP) in Primary Care in November 2017, evidence-based guidance notes for common infections encountered by family doctors have been developed with a view to reducing unnecessary prescription and the emergence of AMR.

Health education materials including disease information sheets, posters and pamphlets are available to assist doctors in explaining to patients the nature of disease and the importance of adherence to doctors' instructions. The guidance notes and related materials are accessible in the ASP in Primary Care thematic page.

In order to enhance public’s knowledge and awareness on AMR and proper use of antibiotics, Department of Health had also launched a series of health education and promotion based on the survey result.

The executive summary and the full report can be accessed here.